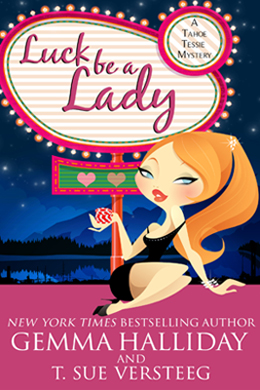 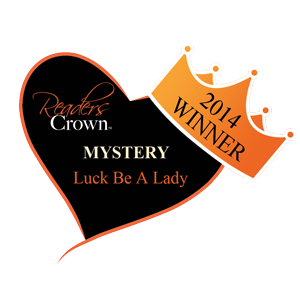 Tessie King has just inherited the biggest casino in South Lake Tahoe, Nevada: the Royal Lakeside. What she didn’t bargain for are the problems she inherited with it.

Having left Tahoe years ago, the underbelly of the casino trade is a far cry from the art world Tessie is used to. High-stakes cons, inside jobs, wise guys… Tessie quickly realizes she’s in way over her head. And things go from bad to worse when questions start to arise about the nature of her father’s death. Enter FBI agent Devin Ryder, member of the Nevada Organized Crime Task Force. He’s had his eye on the King family for months, and with the suspicious death of its leader, Ryder now his Tessie squarely in his sights. If Tessie doesn’t want to be running her casino from behind bars, she needs to find out how her father really died, who’s behind it, why, and how to get them into Agent Ryder’s hot little hands before he gets his hands on her. All the while catching a con-man, beating the competition, and running a multi-million dollar business.

Tough job? Fo’get about it. All in a day’s work for this lady luck.

When I was ten, my dad taught me how to play blackjack. I’d proudly shown him my fourth grade report card bearing the A I’d earned in math, and he’d said, “Nice work, Tessie. Now let’s put those skills to good use.” He’d taken me upstairs to the VIP blackjack tables in the back of his casino, set me up with one of his dealers in a crisp, white shirt, and taught me the art of counting to twenty-one. I heard him bragging later to his director of operations what a quick study I was. In two hours, I’d cleaned him out of $600 in chips.

That was almost twenty years ago, but it was still one of my most vivid memories of him. Though, to be honest, I didn’t have a whole lot of memories of my father to choose from. Mom and he split when I was just two, and she’d promptly moved me south to Berkeley and away from the high-rolling life my father had carved out for himself here. I’d grown up only seeing him every other Christmas and during summer breaks. Our relationship wasn’t what you’d call close, but it wasn’t strained either. I guess I’d always looked at Richard King more like one would a fun uncle than a father figure.

Beside Britton stood Alfonso Malone, or Alfie, my father’s Director of Operations and head of security. Tall, grim, and not someone I’d want to meet in a dark alley. A scar ran across his cheek, his nose lay at a crooked angle, and his voice held a deep gravel that spoke of a hard life before donning the expensive suits he wore to be my dad’s right-hand man. He had a comforting arm around Britton, but his eyes were firmly fixed on the casket, almost as if he was examining it for proof my dad was really in there.

Surrounding them was a slew of people dressed in black who I didn’t know. Not surprising, considering it had been some time since I’d seen my father. A year? Two? I couldn’t remember now. To be honest, the allure of the blackjack tables had long ago faded for me.