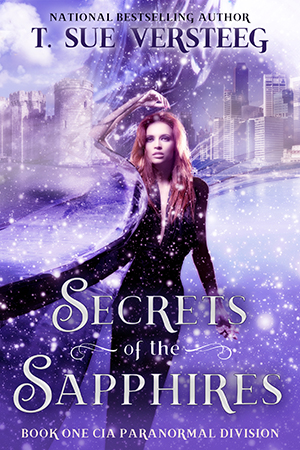 Nia Brooks became an agent for the CIA to get information on her parents’ deaths. After joining the predominantly male Paranormal Division, she quickly learns to fend for herself among the men, vampires, and shifters. When she finds herself paired with an egotistical agent, the bloodsuckers and hairy boys don’t seem so bad, after all.

Garrett Van Deren has his own agenda behind joining the CIA. When his dead partner’s body disappears without a trace, he knows the vampire underground is responsible, and the Paranormal Division offers him answers. He finds himself second-guessing his choice when he meets his new partner. At about a hundred pounds soaking wet, he’ll be babysitting her instead of tracking down the killer.

When they’re tossed back in time to Medieval England by a mysterious white sapphire, two headstrong agents must learn to trust one another while they search for the people responsible for their fate and a way back to the Twenty-First Century, before it’s too late.