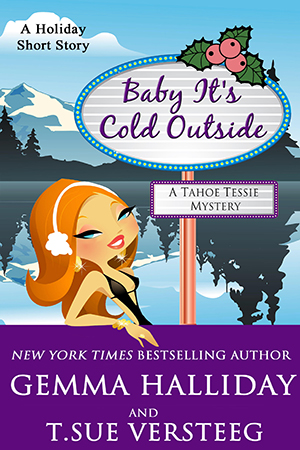 Tessie King thought she knew all there was to know about tracking down bad guys after helping to find her father's killer. But when she’s locked out of the Royal Palace Casino in South Lake Tahoe during an ice storm, she’s suddenly faced with the task of tracking her own would-be assassin.

I reached my quivering hand into my blazer pocket… And realized that in my haste to get downstairs I'd left my phone in the penthouse. Fabulous. Trembling, I tucked my hands under my arms and screamed again. Nothing really recognizable, just shrieks in hopes of getting someone’s attention.

I backed into the corner next to the door to block as much of the wind and sizeable hailstones as I could. I'm not sure how long I sat there, but it didn't take long before every part of me was either completely numb or tingling, on its way there. The high, frigid winds still found a way to whip around me. Sleet pelted my face as I slid down the coarse brick wall, tucking my feet under me to warm them. I had a momentary spark of remorse at the thought of scuffing my shoes, but this was an emergency worthy of it, if there ever was one. I could no longer feel my nose, and my eyelids were sticking together with each blink. I screamed one last time, willing myself not to cry. Tears would so not be a good thing. My mind wandered, contemplating how long it would take for hypothermia to set in.